After William's only son died, he decided to make his eldest daughter Alina, and her husband John de Mowbray, heir to the Lordship of Gower. 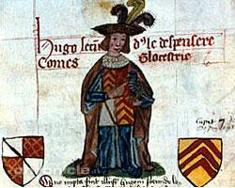 Either desperate for money or very devious William tried at the same time to sell the Lordship to Hugh Despenser, Lord of Glamorgan and a favoured companion of King Edward II. It all got rather messy as King Edward confiscated Gower causing the barons to revolt! John de Mowbray seized Gower in 1321, but was captured in battle fighting the King. He was hanged in York in 1322.

Following her husband's execution, Alina and her son John were imprisoned in the Tower of London. Although her father died in 1326 she had to wait until Edward II died the following year to secure her inheritance. She ruled Gower until her death in 1331, when John, her son, became Lord of Gower. He was probably responsible for adding the castle's crowning glory, the arcaded parapet walk, around this time. The de Mowbray Lords of Gower were largely absentee landlords, choosing to live on their English estates. Stewards ran their affairs in Swansea and they developed a new building within the castle bailey called Place House.