Visitors to Swansea city centre may have recently noticed a new gold-coloured pathway taking shape in the area of the former St David's Shopping Centre. 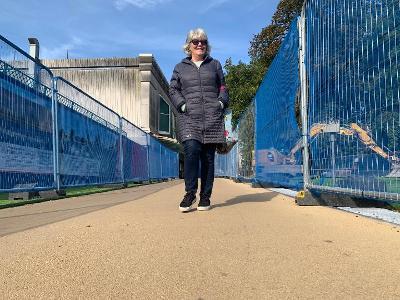 Forming part of the £135m Copr Bay phase one district, the pathway will lead from close to the New Look store down to the new bridge over Oystermouth Road that connects the city centre with the Swansea Arena and coastal park development.

Currently under construction, the gold-coloured pathway will pass through a new temporary area being introduced at the former St David's Shopping Centre site to introduce more vibrancy there, pending its longer-term regeneration.

A temporary pop-up park is also soon being put in place there, along with temporary units for local food and drink start-up businesses.

Swansea Council is developing the Copr Bay district, which is being advised by development managers RivingtonHark. Buckingham Group Contracting Ltd is leading on the district's construction.

Cllr Rob Stewart, Swansea Council Leader, said: "The new gold-coloured pathway being constructed will give local residents and visitors to Swansea a clear link between the city centre and our emerging £135m Copr Bay phase one district, benefitting businesses and facilities in both areas.

"It's been deliberately set in a gold colouring to match not just the new bridge over Oystermouth Road, but the stunning panels around Swansea Arena too.

"It's part of a plan to develop better connections than ever before between the city centre and our seafront, which will soon make even more progress when early proposals for both the Swansea Central North and Civic Centre sites gather more pace.

"We now have an award-winning preferred development partner on board - Urban Splash - to lead a £750m regeneration of those sites and others, but a temporary scheme will also be introduced at the former St David's Shopping Centre site in the meantime.

"As well a new temporary pop-up park and new temporary units for local start-up food and drink businesses, play facilities for children are also planned there, along with events to generate even more vibrancy pending the site's major long-term regeneration."

Also forming part of a temporary plan for the surrounding area is the demolition of the Llys Dewi Sant building and the St David's multi-storey car park.

Demolition materials will be re-used as part of a new temporary surface on site. New car parking is soon being introduced nearby as part of the Copr Bay phase one district.

New lighting will also be introduced on site, along with information to show how the area will look in future.