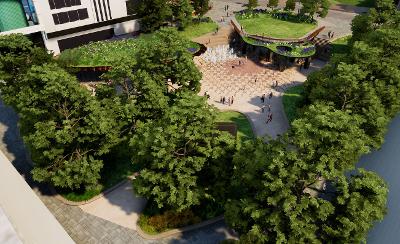 Swansea Council's cabinet agreed to a smart new concept for the city centre Castle Square Gardens - one that introduces more greenery, fun and reasons to visit.

Public consultation this year saw 95% of people back a council concept for a space with more trees, grass and other greenery.

A detailed design has since been drawn up - and this was presented to the cabinet today.

Members agreed to commit capital finance funds to support the development over the next two years.

The plans will now go through a formal planning process next summer. This will be another chance for the public to have their say.

If plans are approved, the new gardens could be in use by late 2023. The upgrade forms part of Swansea' £1bn regeneration, linking in with the new-look Kingsway and Wind Street, with Copr Bay and with other forthcoming multi-million pound schemes in locations such as the Civic Centre site.

Together, they will see thousands of jobs retained and created in the city centre and Swansea become a place where more people want to live, work, study and spend quality free time.

Two café-restaurant pavilions: One will be in the current stepped area, the other near the Zara shop.

A more active area: The current water feature will go. Instead, there will be water jet features at ground level.

Improved connections with neighbouring areas:New seating and outdoor dining areas could be introduced in Temple Street and Princess Way.

The vision, which takes into account public opinions expressed to the council over the past few years, has been drawn up by respected architects ACME and development managers Spider.

Council leader Rob Stewartsaid: "Our greener, more welcoming Castle Square Gardens will play a key role in Swansea's big future. This 21st Century concept has a keen eye on the location's green past.

"It will be much more family friendly - a Castle Square Gardens for the 21st Century."

Robert Francis-Davies, the council's cabinet member for investment, regeneration and tourism, said: "Castle Square Gardens will be accessible to all, a pivotal focal point for gatherings.

"The extra greenery will have multi-functional benefits for residents and contribute positively to creating an attractive destination space for visitors.

"The new water features will mean a new visual attraction and play feature."

The work would be funded in a number of ways, including from the council budget. Revenue would include income from leases on the food and drink units. The big screen would remain.