Swansea business and university leaders have given a thumbs-up to the city's emerging new £135 million Copr Bay phase one district. 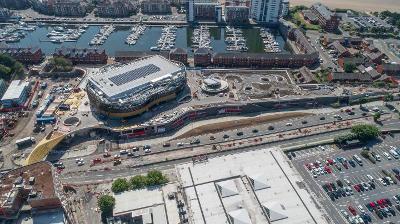 A small group was given a tour of the district, which includes the Swansea Arena, the coastal park and the landmark new bridge over Oystermouth Road.

Also included as part of Copr Bay phase one are apartments, spaces for hospitality and leisure businesses, and plenty of car parking.

The Copr Bay phase one district is being developed by Swansea Council and advised by development manager RivingtonHark.

Construction, being led by Buckingham Group Contracting Limited, is earmarked for completion this year.

Professor Ian Walsh, Provost of the University of Wales Trinity Saint David's Swansea and Cardiff campuses, said: "UWTSD is proud to be Swansea's city centre university and a partner with Swansea Council and Swansea BID in the transformational changes taking place to enhance Swansea's status as one of the UK's premier waterfront cities and an attractive destination for students from across the world.

"We are delighted to see the progress being made at the city's arena and Copr Bay phase one district to create a new jewel in the heart of Swansea's crown."

Speaking about Swansea Arena, Lisa Hartley, Quadrant Shopping Centre Manager, said: "It's incredible. You can just imagine being in there, in the middle of a concert or a show. It's fantastic to see all these visuals we've seen coming to life."

Russell Greenslade, Chief Executive of Swansea BID (Business Improvement District), said: "It's amazing to see this happening in the city centre and within the BID area. On behalf of the 800 or so businesses which are in the city centre, we can't wait for Copr Bay phase one to be operational so the whole of Swansea can benefit. Congratulations to Swansea Council and partners for delivering the project."

Juliet Luporini, Chair of Swansea BID, said: "The arena and the whole Copr Bay phase one district is absolutely fantastic. It's something Swansea can be very proud of both now and into our future."

Swansea Council is financing Copr Bay phase one, with some funding for the arena coming from the Swansea Bay City Deal.

The landmark bridge forming part of the scheme is part-funded by the Welsh Government's Active Travel fund.