Roads in Swansea get the anti-skid treatment

Main roads and side streets in Swansea have been treated to a new surface to prevent vehicles skidding. 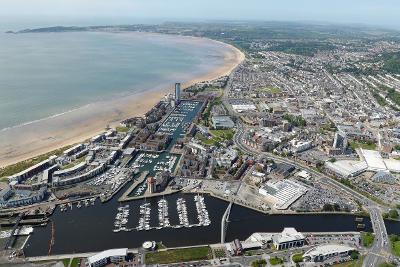 Motorists in the city may already have driven along some of the newly treated roads where improvements have been made to upgrade the road surface and increase their anti-skid qualities.

The maintenance work, known as surface dressing, has been completed on more than a dozen roads in the last month, covering more than 30,000 sq metres.

The work is normally completed using a temporary road closure or closing one lane at a time to finish the job.

Roads include Trewyddfa Road in Morriston, Ystrad Road in Fforestfach and Bohun Street in Manselton.

Mark Thomas, Cabinet Member for Environment Enhancement and Infrastructure Management, said: "Our highways teams have been very busy in recent weeks and throughout 2021 despite the pandemic.

"The latest improvements are usually done fairly quickly and with minimal disruption to motorists. Once completed, the road surface is a big improvement on what it was previously, making them safer to drive on."

Further highway improvements such as complete resurfacing schemes were also carried out earlier in the year with a number of roads in the Townhill community completely resurfaced.

All the improvements are part of Swansea Council's pledge to invest more than £5 million on the city's roads during 2021/22.

Cllr Thomas added: "This year has been another big year for highway maintenance and the investment we have put in to improve roads across our city.

"Everyone wants to see improvements to roads and streets and we are doing everything we can to make sure roads in most need of attention are dealt with."