Dedicated to the pioneer Christian missionary 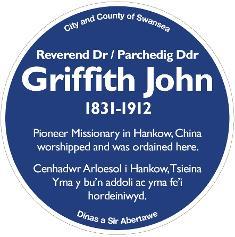 Griffith John (1831-1912) was a pioneer Christian missionary to China in the period 1855 - 1912. Born in Swansea at 14 Llangyfelach Street in Greenhill he worshipped at Ebenezer Chapel and was received into membership as an infant of 8 years of age. He delivered his first sermon at a prayer meeting aged 14 and became a regular preacher at 16. Ordained in 1855 here at Ebenezer, Griffith John left for China where he would serve for 55 years; there he became known for his missionary journeys penetrating into the Chinese interior at distances of up to 5000 kilometres. Whilst there he translated the New Testament and part of the Old Testament into more than one dialect.

He founded the Union Hospital in Wuhan province which is now a major centre for healthcare and medical research. In short Griffith John made a major contribution to the Church in China as an author, translator and preacher and his journey started in Swansea at Ebenezer Baptist Church.