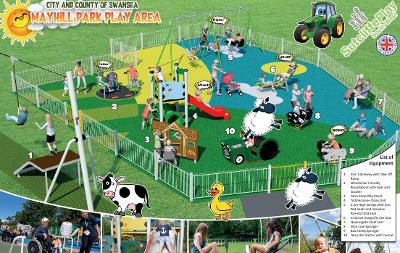 This year each ward in Swansea is being given at least £36,000 to invest in new play equipment or to carry out repairs to existing facilities.

Upgrades have been agreed for five new upgrades at Mayhill, Morriston, Pennard, Cwmbwrla and Rheidol Flats in Mynyddbach. Upgrades and new facilities take up to six weeks to install and are being carried out by a range of contractors on behalf of the council.

The work comes as part of a pledge by Swansea Council to create or improve a number of play areas in our communities, as the city emerges from the pandemic. Apart from the five due to start shortly, eight more projects are set to be completed in the next month or so.

Robert Francis Davies, Swansea Council's Cabinet Member for Investment, Regeneration and Tourism, said: "Children's play areas are a key part of our communities, enabling young children to have fun and play in a safe environment.

"During the pandemic outdoor play areas became a haven for young children and their families to enjoy fresh air and exercise safely and Swansea Council was there to support communities."

The city is home to 86 playgrounds where children can play safely and have fun. Some are in need of much needed upgrades while others have recently been installed as part of major developments such as new school builds.

The eight due to be officially opened in the coming weeks include Gowerton, Weig Fawr, Dunvant Meadow, Polly's Park and the playground at Singleton Boating Lake.

"Every ward in Swansea will benefit from what we are doing and we are working with local ward members in each community to ensure the funding is directed towards those play areas that will benefit from this additional investment."

For more information go to https://www.swansea.gov.uk/article/9312/A-new-generation-of-play-areas-for-our-children