Dedicated to the suffragist and campaigner for women's rights 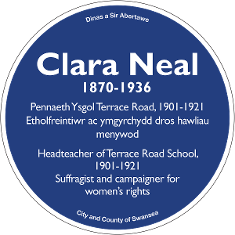 Clara Neal was born in Devon in 1870. She was head teacher at Terrace Road School Swansea from 1901 to 1921. During this time she was very active in the suffragist movement.

She was among those thrown out for asking questions about votes for women to David Lloyd George at a meeting in the Albert Hall in 1906. The unsavoury incident prompted her and her lifelong friend Emily Phipps to help to set up a branch of the Women's Freedom League in Swansea. They were both on the committee and organised their own meeting in The Albert Hall Swansea in 1909. Although met with groups of men banging drums, blowing trumpets and firing pea shooters, the speakers were able to inspire the attention of the crowd and the meeting was a success, as was the Pageant of Famous Women which the Women's Freedom League brought to Swansea in 1910.  In 1911 Clara Neal boycotted the national census by hiding in a cave on Gower overnight. She participated in other peaceful protests as a suffragist in her work with the Women's Freedom League in the ensuing years. She must therefore have been so proud to close the school for the afternoon in 1918 to give her women staff the opportunity to register before the first ever British general election which granted at least some voting rights to women. Full equality with male voters was to come only later.

After Terrace Road, Clara Neal was head teacher of Glanmor Girl's School in Swansea and in 1927 she became president of the National Union of Women Teachers, fighting for equal pay and conditions for women teachers. The plaque has been placed at Terrace Road School in memory of her strong association with the school during the height of the struggle for women's suffrage.