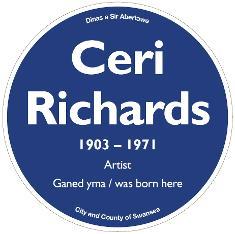 Ceri Richards was born in Dunvant into a highly cultured working-class family. He went to Gowerton Intermediate School where he drew constantly and won local art competitions. At the age of 18 he enrolled at Swansea College of Art and in 1923 spent time at Greynog Hall looking at the work of the French impressionists, Rodin and old-master and modern drawings. This experience confirmed in him his ambitions to become an artist and in 1924 he applied for and was awarded a scholarship to study in London at the Royal College of Art.

Many of Ceri Richards's paintings are in the Tate Britain collection and the Glynn Vivian Art Gallery here in Swansea. He did fascinating interpretations of Dylan Thomas's poem 'The force that through the green fuse (1933)'. In the mid-1940s music became a theme in his work as befits someone brought up in a home where all the children were taught to play the piano and become familiar with the works of Bach and Handel. Richards spent most of his time in London after 1924 and died there in 1971.

He is widely regarded as Wales's finest modern artist of the 20th century.