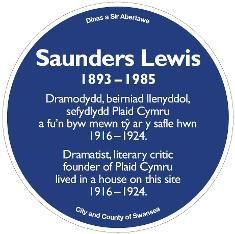 Location: The plaque was attached to a wall which is now part of the Ty Mawr sheltered housing complex.

Saunders Lewis was a Welsh poet, dramatist, historian, literary critic and political activist. He was a prominent Welsh nationalist and a founder of Plaid Cymru. Lewis is usually acknowledged as one of the most prominent figures of 20th century Welsh-language literature. He was a 1970 Nobel nominee for Literature and in 2005 was 10th in a BBC poll to name Wales's greatest-ever person.

Saunders Lewis lived for a time (1916-24) in a house called Ffynone Villas on what was Ffynone Terrace. The house has since been demolished and the road name changed to Hanover Street.