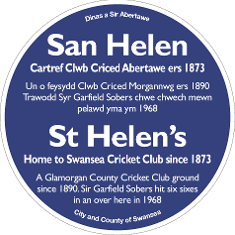 In its 142 year history, the ground has witnessed of some of the most exciting and famous cricket matches at regional, national and international level. Swansea also boasts the oldest known cricket club in Wales, dating from 1785.

Founded in 1873 as the home for Swansea Cricket Club, St Helen's has long captured the imagination of the sport loving public and has played a crucial role in the social and recreational history of the area.  Indeed the former cricketer and now commentator Peter Walker recently described St Helen's as the "spiritual home of Welsh Cricket".

Over the years, St Helen's has witnessed some of Glamorgan Cricket Club's most famous victories. These include: