As proposed by the Archif Menywod Cymru / Women's Archive of Wales. 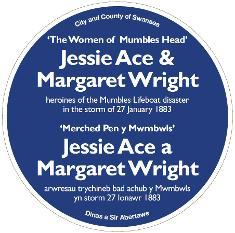 Location of blue plaque: near Mumbles Pier, the amusement arcade and some steps leading down to a small beach which looks out onto Mumbles lighthouse.

The sisters were the daughters of Mumbles lighthouse keeper, Abraham Ace. They were two 'ordinary' yet 'extraordinary' young women, who, in 1883, heroically risked their lives, in attempting to save members of the crew of the Mumbles lifeboat, Wolverhampton. The lifeboat had gone out during the early morning of the 'Great Storm' of Saturday January 27th 1883, to assist the 885 ton barque, Admiral Prinz Adalbert of Danzig, Germany, when she drifted onto the outer island of Mumbles Head and was wrecked below the lighthouse.

The two women subsequently became known and admired worldwide when a dramatic sketch appeared on the front page of the respected and influential British weekly illustrated newspaper, The Graphic for Saturday 24th February 1883.

Their bravery became the inspiration for the epic, if not totally accurate poem, 'The Women of Mumbles Head' by the influential Daily Telegraph theatre critic, Clement Scott (1841-1904). In recent years, poet, Maura Dooley, has written her own beautiful poem, bearing the same title. The original poem was recited by generations of children in Mumbles, Swansea and further afield.

The National Library of Wales, Aberystwyth, holds a set of seven hand-coloured 'Magic Lantern' slides of a photographic re-enactment of the actions of the Ace sisters, used to 'accompany' public recitations of the poem.

One-time Mumbles Lifeboat crew member, now Surrey-based writer and maritime historian, Carl Smith, was 'raised' on that epic poem, handed down by his father's story-telling and by the fact his grandmother had been with villagers, watching the tragedy unfold. He has fully researched 'The Cambrian' and 'Cambria Daily Leader', Swansea's newspapers, in 1883, covering every angle of this tragedy and his "The Men of Mumbles Head' (Gomer Press 1977) gives us the most detailed account of what happened. He includes the statement from Coxswain Jenkins, the day after the event:

"Two daughters of Mr. Ace went to where I saw the men in the water. I was told that Mr. Ace seemed afraid lest his daughters should get drowned. Maggie cried out, 'I will lose my life rather than let these men drown' and she and her sister tied two shawls together and both of them threw them into the water. By this means they saved two men, William Rosser and John Thomas". Rosser testified how "Mr. Ace's daughters hauled me up". He refers to a soldier (Gunner Hutchings) and the sisters throwing him a rope."

Carl Smith confirms that "The RNLI reports did not mention the actions of the women".

"The coxswain received a silver medal from the RNLI and £50: Gunner Hutchings received its thanks on vellum. The action of the two women was not recognised by the RNLI, but both received gold brooches from the Empress of Germany for looking after the barque's crew".

These two brave women have long deserved more recognition than their reference in a little-known poem. Hopefully this blue plaque will go some way to redressing the lack of recognition for their valiant efforts in the early morning of January 27th, 1883.