Dedicated to the British porcelain manufacturer, naturalist and Member of Parliament. 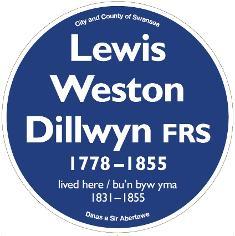 This was dedicated to Lewis Weston Dillwyn (1778-1855) the father of John Dillwyn Llewellyn of Penllergaer and grandfather of Amy Dillwyn (who has a blue plaque dedicated to her (not part of this scheme) on the promenade near the West Cross Inn).

L.W. Dillwyn was born in 1778, the eldest son of a Pennsylvanian Quaker called William Dillwyn, who campaigned against slavery and who purchased Swansea's Cambrian Pottery in 1802 on his son's behalf.

An ardent student of nature Dillwyn published numerous works on botany and conchology and was elected a Fellow of the Royal Society in 1804. He accompanied Miss Talbot of Penrice to Goat's Hole, Paviland, after human remains were discovered in the cave in December 1822 and wrote to Oxford Professor of Geology William Buckland to examine what became known as "The Red Lady of Paviland".

Dillwyn was appointed High Sheriff of Glamorgan in 1818, represented Glamorgan as a Whig (Liberal) MP in the first reformed parliament from 1832 and became Mayor of Swansea seven years later. Having lived in Burrows Lodge, which used to stand near Swansea Museum, he purchased Sketty Hall in 1831 for £3,800. In 1835 he became a founder and first president of the Swansea Philosophical and Literary Society, which became the Royal Institution of South Wales and built Swansea Museum six years later.