Dedicated to the acclaimed novelist 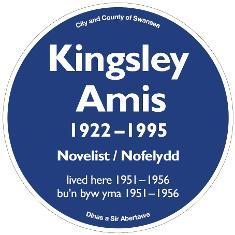 How many people realise that there is another major British writer with a connection to Swansea? Kingsley Amis (1922-95) was born in London and educated at Oxford before finding employment as a junior lecturer at Swansea University in 1949 and lived in the town (as it then was)  until 1961.

When Amis first came to live in Swansea he stayed in lodgings near Guildhall Green and St. Helen's Crescent. Then came a number of flats and houses in Sketty, Mumbles and the Uplands. Should anyone wish to create one, there would be no shortage of destinations with which to populate a Kingsley Amis Trail in Swansea.

Whilst working as a very junior lecturer in the English department of Swansea University he wrote his first novel 'Lucky Jim' (1954) which enjoyed international critical and artistic acclaim. Altogether Amis wrote four novels whilst a lecturer in Swansea, the second of which (That Uncertain Feeling - 1955) has a distinct local flavour. So much so that when it was made into a film in 1958 (and retitled as 'Only Two Can Play') many locations in Swansea were used. His third novel was called 'I Like It Here' (1958) and his fourth 'Take A Girl Like You' (1960) contained no local interest.

Long after he'd moved away from Swansea and towards the end of his life, Amis won the prestigious Booker Prize literary award in 1986. Called 'The Old Devils' this too was set in Swansea and was made into a television film by the BBC. Amis left Swansea University for Cambridge University in 1961 although he continued to come and stay for three weeks or more throughout the 1980s and 90s.

Kingsley Amis was awarded CBE in 1981, given an Honorary Fellowship of Swansea University in 1985 and knighted in 1990.

Amis was a major (English) writer of the mid- 20th century who carried on writing for another forty-two years after Dylan Thomas died in 1953. In the mid-20th century Swansea was fortunate to be home to two great literary talents; one home-grown (DT) and the other adopted (KA). Between the birth of one in 1914 and the death of the other in 1995 those two great talents with a significant Swansea connection spanned the 20th century.