Dedicated to the scientist, judge and inventor of the fuel cell 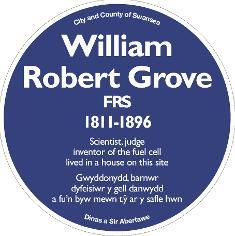 The fuel cell or battery is generally thought to be very much a product of the 20th century's technological advances. An invention that helped power spacecraft, cars and is still used in all kinds of appliances. The genesis of the technology behind it however goes right back to the early decades of the Victorian era.

William Robert Grove (1811-96) was a scientist and a lawyer who invented Grove's battery in 1839. Born in Swansea he was educated at Brasenose College, Oxford. He was called to the Bar in 1835 but spent several years at home in Swansea at work on experiments in electrochemistry which culminated in the invention of the Grove (fuel) cell. Widely regarded as 'the father of the modern fuel cell' (battery) he was made a Fellow of the Royal Society (FRS) in 1840. By 1842 and dint of careful experimentation he had constructed the first working fuel cell. This remarkable man also became a Queen's Counsel in 1853, a judge in 1871 and was knighted in 1872.  He is one of only two Swansea-born men who can claim to have become High Court Judges.