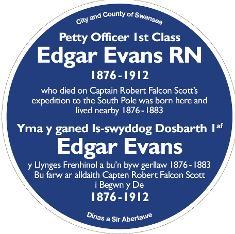 Edgar Evans (1876-1912) was born in Middleton Hall Cottage at Middleton on Gower and brought up nearby. He lived in Middleton until he was 6 and then the family moved to Swansea. He joined the Royal Navy at 15 and later served under Captain Scott undertaking two expeditions to the Antarctic in the years between 1901 - 03.

He died on 17th February 1912 whilst returning from the South Pole with the Southern Party of the British Antarctic Expedition under the command of Captain Robert Falcon Scott. The latter once described Edgar Evans memorably as ..."a giant worker he is responsible for every sledge, every sledge-fitting, tents, sleeping bags, harness and when one cannot recall a single expression of dissatisfaction with any one of these items, it shows what an invaluable assistant he has been".

His body was never recovered and still rests somewhere near the Beardmore Glacier in Antarctica.