Made famous by the Dylan Thomas poem 'The Hunchback in the Park'. 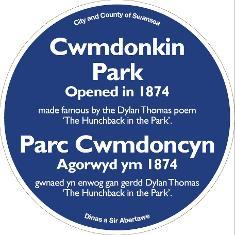 It was always part of the blue plaque scheme to commemorate not only famous people but also places and events in Swansea with a plaque. In this way the scheme can draw attention to not only people and buildings but also to the spaces between them.

Swansea has an amazing 48 parks within its boundaries. Given that the population of Swansea is now around 240,300 that means we have a park for roughly every 5000 inhabitants.

Cwmdonkin Park was opened all of 140 years ago when the city was still an industrial seaport with a global trading empire. It cost £4.650 to buy the land needed and controversially the Borough contributed to that sum.

Parks in the 1870s were not seen as a picturesque amenity - more of a way combating ill-health and bad habits by giving working people a place in which to relax in pleasant surroundings.

Perhaps the park is best known because of its connection to Dylan Thomas and was part of the landscape of his childhood and because it inspired his poem The Hunchback in the Park. Taken with the house at Cwmdonkin Drive we are incredibly fortunate in still being able to absorb something of the environment Dylan Thomas knew in a city that knows and appreciates the value of amenity and environment.