Dedicated to the local poet and novelist, managed the Swansea Bathing House 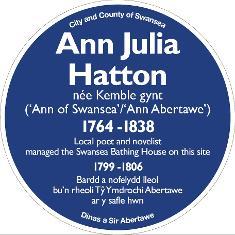 Location of plaque: Swansea Civic Centre (which is built on the site of the former Bathing House).

Ann Hatton (1764-1838) was proposed for a Swansea blue plaque for the following reasons:

Ann Julia Hatton, née Kemble, was a daughter of the Kemble theatrical family and sister of famous actress Sarah Siddons. The victim of a bigamous marriage, her early life in London was colourful and sometimes scandalous. After her second and legal  marriage to William Hatton the couple lived in New York before settling in Swansea to run the Bathing House from 1799 - 1806.

Ever resourceful, after her husband's death she briefly ran a dancing school in Kidwelly before returning to Swansea for the rest of her life. Here, she supported herself as a writer using the pen name 'Ann of Swansea', producing some 15 romantic and gothic novels which enjoyed great popularity, as well as many poems and other short pieces. She died aged 74 in 1838 and was buried in St John's churchyard (later named St Matthew's) in High Street. Two portraits of Ann exist, one in the Glynn Vivian Art Gallery, and another in Swansea Museum.