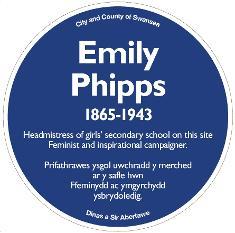 Location for plaque: Trinity Place Higher Grade School for Girls was located on the corner of Trinity Place and Richards Place. This site is now occupied by the Orchard Centre.

Emily Frost Phipps was born in Devonport in 1865. She trained as a teacher and gained a first-class degree from London University. In 1895 she was appointed Headteacher of Swansea's Central Higher Grade School for Girls in Trinity Place, which she transformed into an excellent secondary school - described as one of the best in Wales due to her influence. She inspired a generation of teachers and encouraged her pupils to be independent and achieving.

Emily Phipps was a committed and vigorous campaigner for women's suffrage - she founded the Swansea branch of the Women's Freedom League, and participated in the 1911 Census boycott in protest against the Liberal government's refusal to give the vote to women. She was a prominent member of the National Federation of Women Teachers, a pressure group within the NUT which campaigned for equal pay for women teachers and equality of opportunity for girls' education.

Also while teaching, Emily Phipps studied to become a barrister. In 1925 she was called to the Bar, and left Swansea for a legal career in London where she continued her campaign to improve the education and status of women. She died in 1943. An obituary said of her 'There seemed to be nothing she could not do if she turned her attention to it'.