Dedicated to the rock musician, member of The Iveys and Badfinger 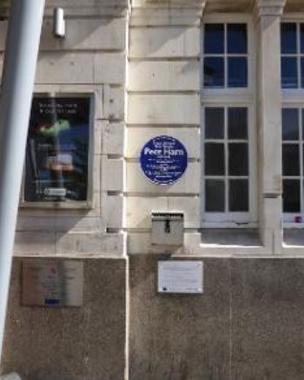 This was the first blue plaque of the current scheme and was unveiled on April 27th, 2013 at Swansea's High Street Station. It was dedicated to the rock musician Pete Ham (1947-1975) who committed suicide at the tragically early age of 27 in 1975. Swansea-born Ham was a founder-member of the rock group Badfinger which enjoyed chart and album success in the early 1970s. He will probably be best remembered for writing "Without You" which enjoyed world-wide success when recorded by Harry Nilsson in 1972.

The plaque was attached to the exterior of High Street Train Station because of its proximity to the adjacent Ivey Place where the band would meet to practice. Before they became Badfinger the band took the name The Iveys after this place name.