We have created a number of exhibitions online about the history of our local area. We hope you enjoy them. 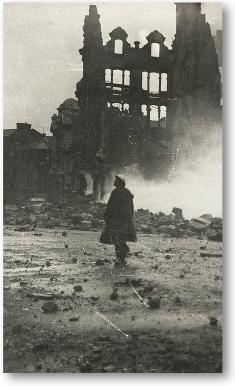 Throughout the Second World War, Luftwaffe bombers targeted towns in South Wales. Swansea was by far the hardest hit and nearly 400 people were killed between 1940 and 1943, the majority of them in the Three Nights' Blitz, 19-21 February 1941, which laid waste the centre of the town. This is our memorial to the civilian war dead, not just of Swansea, but of Neath Port Talbot as well.

The story of the Three Nights' Blitz of Swansea

There is no film footage of the Three Nights' Blitz, so to tell the story of those three terrible nights, 19-21 February 1941, we have made these two films from contemporary photographs among our holdings, and from the Blitz diary of James R. John, journalist and member of the Home Guard.

The exploits of the Welsh volunteers who took part in the Spanish Civil War are well known. But did you know that Swansea gave shelter to 80 children from the Basque Region? This feature tells their story.

On the 75th anniversary of VE Day, this film is our reflection on what that meant to Swansea. It is taken from pictures in our holdings.

This is our online roll of honour to commemorate the centenary of the end of the First World War. It contains the names of all the people listed on the many war memorials and rolls of honour we hold in the Archives, with digital versions of the memorials themselves.

One summer, around 1910, a photographer took a series of pictures of Swansea, showing it at its best a few years before the outbreak of the First World War. Here are some of them.

We hold an important collection of records for Swansea Hebrew Congregation, the oldest Jewish community in Wales. Here is a celebration of its history.

An exhibition put together to celebrate the 75th anniversary of the building of Swansea Guildhall in 2009, it also gives the history of some of the other town halls that have served as the headquarters of Swansea Corporation over the years.

Originally put together to mark the centenary of the South Wales Cottage Exhibition in 2010, this exhibition explores the Garden City Movement and the development of Townhill and Mayhill.

If the torch relay had come through Swansea in 1908, what would the 2012 route have looked like at the time? Our award-winning film shows how it might have been.

The history of Swansea Market

Rebuilt after the Blitz in 1941, Swansea Market reopened around 50 years ago. This exhibition looks at how markets in Swansea have developed over the years.