Hundreds of primary school children in Swansea have been gifted cycling equipment as part of a drive to get more people cycling in the city. 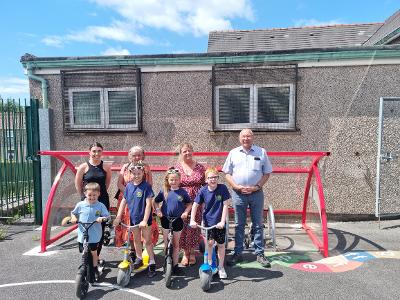 Six schools in the city, including Morriston Primary School, Llangyfelach Primary, St Illtyd's RC Primary, Ysgol Gymraeg Y Cym, Cwm Glas Primary and St Joseph's Catholic Primary School, have all been provided a range of cycling kit including balance bikes, scooters and storage facilities, so young children can learn to cycle and have fun while in school.

All the equipment has been gifted to the schools by local contractors who have recently constructed new walking and cycling routes near to the schools.

The new routes in Morriston, Clydach and Bonymaen were completed after Swansea Council successfully secured Active Travel funding. The aim of the routes are to provide improved links for walking and cycling and encourage everyone to consider walking and cycling instead of using a car.

In Clydach, more than 1.5kms of towpath along Swansea Canal has recently been upgraded to providing a safe shared-use path for walkers and cyclists.

A new 1.8km route running along banks of the River Tawe has also been completed near Morriston and a further 900 meter long route along Clasemont Road has been created, linking up with an existing section along the A48.

A 700 metre long route has also been constructed along Jersey Road in Bonymaen (between the junction of Carmel Road and Cwm Chapel Road).

All four routes were designed by the Council in line with Welsh Government Active Travel guidance and were constructed by local contractors - Ian Davies Plant, T Richard Jones (TRJ) and Evan Pritchard.

Andrew Stevens, Cabinet Member for Environment & Infrastructure, said: "These latest completed walking and cycling routes are hugely beneficial to local communities. We are doing all we can to encourage more people to utilise these routes and help them to stay healthy.

"It's great that we can work with local schools in each of the communities and help give young children the encouragement they need to be confident on a bike and hopefully for them to take that experience into later life.

"I'm delighted that the contractors who have assisted us in delivering these schemes have also donated this equipment to the schools."

More recently, the Council has secured and approved more than £8million of WG funding for the next round of Active Travel and will see even more walking and cycling routes developed during the next 12 months.

Part of the funding will help create a new 2.4km route across Clyne Common, helping to link communities on Gower with Swansea Bay seafront.

A new off-road route between Penllergaer and Fforestfach is also set to be created, stretching for 2.8km through Penllergaer woods.

Cllr Stevens, added: "Once again, we have been very successful in securing this money so we can continue developing these important routes. Our aim is to create a fully linked up network of walking and cycling routes between neighbouring communities.

"Hopefully this enables families to be less dependent on getting around Swansea in a car. At the same time, people can become healthier and also have fun."