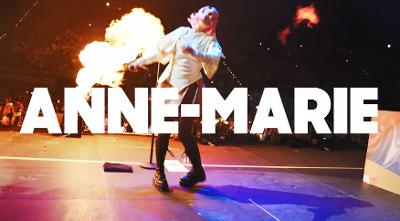 Platinum selling, multi-talented singer Anne-Marie has announced a huge outdoor show in Swansea's Singleton Park this summer. Hitting the stage on Saturday 30th July 2022. Since her breakthrough in 2016, Anne-Marie has become one of the globe's most successful pop stars. She has over 5 billion streams to her name and earned a platinum debut album alongside five Top 10 UK singles.

Main Support on this show comes from hugely acclaimed Mimi Webb hailed by Radio 1 as one of the sounds of '22 having made waves worldwide with her Seven Shades of heartbreak EP and instantly selling out her first UK tour. Already a huge star on TikTok, Mimi Webb can also boast being the first UK female artist, since Dua Lipa in 2017, to land two singles in the UK Top 15 before the release of her debut album.

Opening the show is a new rising star and BRIT Award nominated Gracey.  Already with 140 million streams and a top 10 hit under her belt.

Tickets on sale Friday 11th February at 10am - Find out more

For those that require Ambulant Disabled access please book a GA or Hospitality ticket as normal and contact Ticketing@orchardlive.com with supporting documentation to apply for a companion/personal assistant (PA) ticket, if eligible.