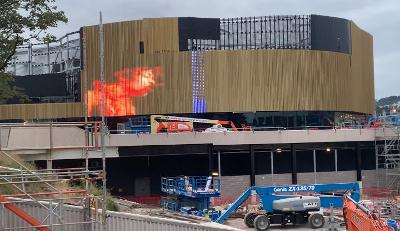 The initial, limited tests follow-on from the installation of some of the gold-coloured LED lighting panels being fitted around the outside of the development.

Further preparatory tests will take place in coming weeks and months as more and more lighting panels are installed.

This will enable the hosting of light shows around the outside of the arena, along with the potential to promote upcoming shows, concerts, conferences and other events.

The 3,500-capacity arena to be operated by Ambassador Theatre Group (ATG) is one part of the emerging £135 million Copr Bay phase one district being developed by Swansea Council and advised by development manager RivingtonHark.

Cllr Rob Stewart, Swansea Council Leader, said: "The start of preparatory, partial testing for some of the LED lighting panels is another step forward for the construction of Swansea Arena, with significant progress also being made on all other elements of the city's emerging new Copr Bay phase one district.

"These are early and limited tests though, so what people see in coming weeks will not reflect the kind of high-quality displays the outside of the arena will host once it's open and operational.

"It's only when all the panels are installed and we have a programme of content in place that we'll see the full capability of the technology, which will combine with everything else that's planned to develop a world class attraction.

"The stunning arena development will also complement other features of Copr Bay phase one to create a vibrant new destination for Swansea residents, businesses and visitors to the city as part of a scheme that will be worth hundreds of jobs and £17.1 million a year to the local economy.

"Copr Bay is one part of a £1 billion regeneration story that's unfolding across Swansea, transforming our city into one of the UK's best to live, work, study and visit."

Copr Bay phase one also includes the 1.1-acre coastal park, along with new car parking, businesses and apartments. Construction, which is due for completion this autumn, is being led by Buckingham Group Contracting Limited, with the arena opening its doors in early 2022.

Swansea Council is financing Copr Bay phase one, with some funding for the arena coming from the Swansea Bay City Deal. The landmark bridge forming part of the scheme is part-funded by the Welsh Government's Active Travel fund.