This new video takes you inside a major development site in Swansea city centre where a high-tech office building is being constructed. 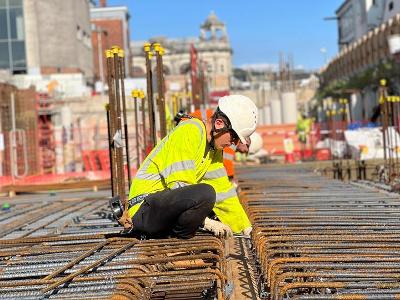 Due for completion in 2023, the 71/72 Kingsway development will provide space for 600 jobs in sectors like tech, digital and the creative industries.

Swansea Council is developing the office building, with Bouygues UK as its main contractor.

Construction of the new building has now started, following-on from the completion of foundation works.

The development, once complete, will be carbon zero in operation and worth £32.6m a year to Swansea's economy.

Set over five levels, it will include 114,000 square feet of commercial floor space featuring flexible co-working and networking opportunities. A new link between Oxford Street and The Kingsway will also be constructed.

The development is being part-funded by the £1.3 billion Swansea Bay City Deal and supported by the European Regional Development Fund through the Welsh Government.

Cllr Robert Francis-Davies, Swansea Council's Cabinet Member for Investment, Regeneration and Tourism, said: "Anyone who's been to the city centre recently will have noticed three giant cranes towering over The Kingsway - two at the new office development site, and the other at the 'living building' site that Hacer Developments is constructing nearby.

"These cranes are a sign of even more progress for our city centre, following-on from major environmental improvements on The Kingsway and Wind Street, and the opening of attractions like Swansea Arena and the coastal park as part of our Copr Bay destination.

"Despite the pandemic, demand continues to be high for office developments like that being constructed at 71/72 The Kingsway. This will help retain our young business talent in Swansea, create even more jobs for local people and generate more footfall and spending in the city centre.

"It's fantastic to see work forging ahead on site as the £1bn transformation of Swansea continues at pace."

Other features of the new development include a green roof terrace and balconies overlooking the city centre and Swansea Bay.

Also due for completion by the end of 2023, the 'living building' scheme led by Hacer Developments will be among the UK's first schemes of its kind. Made up of the former Woolworths unit and a new adjoining 13-storey structure, the scheme will include green walls and green roofs, an educational facility, retail, offices, a landscaped courtyard, rooftop solar panels, battery storage and gardens. Pobl Group will manage 50 affordable apartments forming part of the scheme.