The Kingsway goes green as Swansea points to the future

Stunning new drone imagery shows how one of Swansea city centre's key areas has gone green - and is a signpost to a greener future. 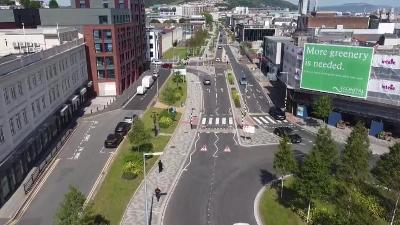 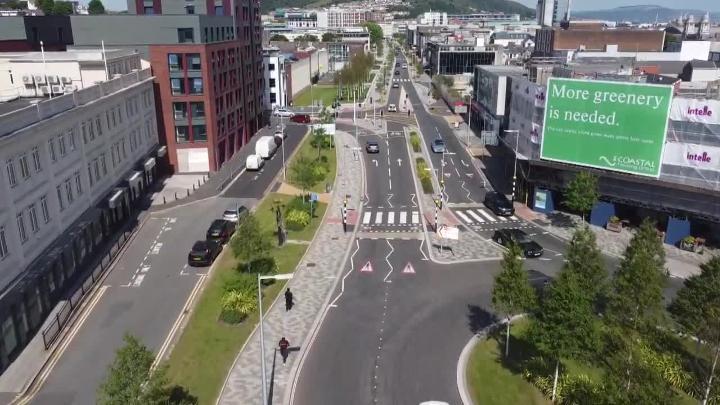 Where there were once four lanes of Tarmac, The Kingsway and Orchard Street now have broad pedestrian walkways alive with trees and other greenery.

As the trees mature the area will become even more green. It's a result of a £12m Swansea Council scheme to improve the Kingsway and neighbouring streets.

Council leader Rob Stewart said: "We aim to transform Swansea into the one of the UK's greenest cities. The Kingsway reflects our plans to increase green cover and biodiversity around the city centre.

"It's great that other organisations and businesses share our ambition for a greener city centre - and that they have greenery as part of their development plans.

"Together, as a key part of our £1bn regeneration programme, they'll help make Swansea a place where more and more people want to live, work and spend quality time."

As more people start to live in the city centre and shop at iconic locations such as the market, others will spend quality time in leisure facilities such as the new Copr Bay district complete with arena and coastal park.

This will bring footfall to encourage new business and support existing traders.

They will notice more greenery taking root, including green walls in locations such as Copr Bay and - thanks to Coastal Housing Group - above the Potters Wheel.

Other plans include roof and terrace greening at a high-tech office development to be constructed at the former Oceana nightclub site at 71-72 The Kingsway.

A "living building" office scheme is due to be constructed nearby, complete with an urban farm-style greenhouse set over four floors. Led by Hacer Developments, that scheme is being part-funded by Pobl Group.

Plans are being progressed for a greener Castle Square - and Wind Street will soon have more planted areas, helping to make it an all-day leisure destination.

The council has a green infrastructure strategy, designed to bring more nature into the Swansea central area.

Coastal's plans for a green wall above the Potters Wheel are funded by the Welsh Government's Transforming Towns initiative, with help from the council.