The man just appointed to manage Swansea Market says it is his dream role. 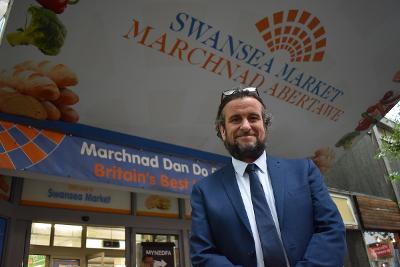 Swansea-raised Darren Cox is eager to make the iconic venue as welcoming and engaging as possible to traders, neighbours and customers.

He became market supervisor after a 27-year career in private sector businesses.

He now heads a market that, in non-pandemic times, attracts more than four million shoppers a year.

Managed by Swansea Council, it is the permanent home to more than 100 businesses, hosts casual traders and puts on regular events.

Darren said: "The market is so close to my heart that I'm thrilled to get this role - it's a dream come true.

"Retail around the UK hasn't had it easy for the past few years but I'm confident that the market can help traders - and the city - come back strongly as we work our way out of the pandemic.

"Swansea Market gives shoppers something that online shopping can't - the human touch - and I want to ensure that all who visit feel safe, secure and welcome.

"We have strong relationships with our neighbours such as the Quadrant and the fantastic new arena and we'll help Swansea as it continues to develop in such a positive way; the progress made on regeneration through the pandemic has been remarkable."

Council cabinet member Robert Francis-Davies said: "I welcome Darren to this pivotal role - he's passionate about Swansea, the city centre and the market."

Darren was raised in Sketty, educated at Olchfa School and vividly remembers being taken around the market by his parents as a young boy.

His first job - soon after graduating from University College Birmingham - was in Tenerife as a holiday rep. He then worked on the island for 25 years in roles such as commercial and operations management.

Before joining the market he was operations manager with the Swansea-based La Braseria group for two years.

Darren lives in Swansea with his partner Natasha and her daughter. He also has an adult son and daughter.

At the market, he replaces John Burns who retired as supervisor in the summer.